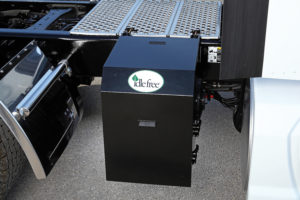 Selecting the right energy source for an APU comes down to how the ROI calculations work out. Auxiliary power units (APUs) can help or hurt a trucker’s bottom line where the operating costs of heavy-duty commercial vehicles are concerned. That’s why Greg Bremhorst, director of heavy-duty sales for Phillips & Temro Industries (PTI), believes choosing the right APU power source is a critical task. With a bachelor of science in Mechanical Engineering from University of Wisconsin-Madison, Bremhorst is currently responsible for strategic industry direction and overall sales for PTI’s heavy duty segment, including its Zerostart, Temro, Arctic Fox, and Idle Free Systems products. In this guest column he outlines some of the advantages and disadvantages of diesel- and electric-powered APUs.

When it comes to spec’ing APUs, truckers must make an energy-source choice: Electric or diesel? Which type is better?

Successfully answering that question is partly based on return-on-investment (ROI) calculations that incorporate maintenance costs, expected length of ownership, and other factors.

For example, the Department of Energy (DOE) estimates a long-haul truck idles 1,800 to 2,500 hours per year when parked overnight, the company said. And every hour a truck idles unnecessarily is equivalent in fuel consumption to about four to five miles of driving and adds an estimated 15 cents in maintenance costs.

Also, regardless of the cost of diesel per gallon, it’s not free, PTI pointed out.

So, which power source is better? Both electric and diesel APUs provide power for heating, cooling and cab electrical devices, the company noted, but there are differences that might make one more attractive than the other, depending on a trucker’s priorities.

First, the initial determining factors are unit price and ROI. According to the North American Council for Freight Efficiency (NACFE), APUs can cost anywhere from $8,500 to $13,000 per unit installed.

On top of that, the American Transportation Research Institute (ATRI), figures that payback time periods ranged from 16 to 45 months for some APUs, while others “were not expected to provide a payback within the period of ownership.”

ATRI found the mitigating factors for APU ROI were based on the level of baseline idling, the usage of the technology, plus the sticker price and ongoing costs for a particular unit.

With diesel-powered APUs, there’s virtually unlimited power available to heat and cool as long as fuel is in the truck. Another consideration is the actual cost of using a diesel APU. If a driver averages eight miles per gallon and drive 500 miles per day, 62.5 gallons of diesel fuel is consumed. The additional diesel use from an APU adds 0.25 gallons of gas per hour or 2.5 gallons during the 10-hour mandatory off-duty time. This brings the total gallons used per day to 65 gallons, which reduces fuel economy from 8 miles per gallon (mpg) to 7.7 mpg.

With electric APUs, there is a “captive amount of energy” produced by the engine’s alternator and stored in an independent battery bank, usually consisting of four batteries. This generates an immediate fuel savings over the diesel APU of 0.25 gallon of fuel per hour while idling, which can adds up to over 600 gallons of fuel saved each year.

Also, electric-powered APUs require minimal maintenance on an annual or scheduled basis, in contrast to diesel APUs. Additional costs for diesel-powered APUs are incurred for oil changes, which are typically needed every 500 to 1,000 hours at a fee of about $200.

Annual maintenance for diesel APUs is due about every 2,000 hours, which includes checking and changing fluids, hoses, clamps & valves, and changing the fuel filter. This runs approximately $800.

Additional pluses for electric units are quiet driver comfort and California Air Resources Board (CARB) compliance, which is key for any truck traveling into the Golden State.

Regardless of power source, a cursory benefit of APUs is driver recruiting and retention. With an estimated one million new drivers being added to the industry over the next ten years, APUs will help reduce recruitment and training costs year after year.

So which APU is better? Regardless of power source, emissions compliance and driver comfort make APUs almost a necessity. There are pros and cons to both diesel and electric, and truck owners are well advised to consider initial cost, functionality, service and maintenance, and return on investment when making their choice.

This website uses cookies to improve your experience while you navigate through the website. Out of these, the cookies that are categorized as necessary are stored on your browser as they are essential for the working of basic functionalities of the website. We also use third-party cookies that help us analyze and understand how you use this website. These cookies will be stored in your browser only with your consent. You also have the option to opt-out of these cookies. But opting out of some of these cookies may affect your browsing experience.
Necessary Always Enabled

Any cookies that may not be particularly necessary for the website to function and is used specifically to collect user personal data via analytics, ads, other embedded contents are termed as non-necessary cookies. It is mandatory to procure user consent prior to running these cookies on your website.